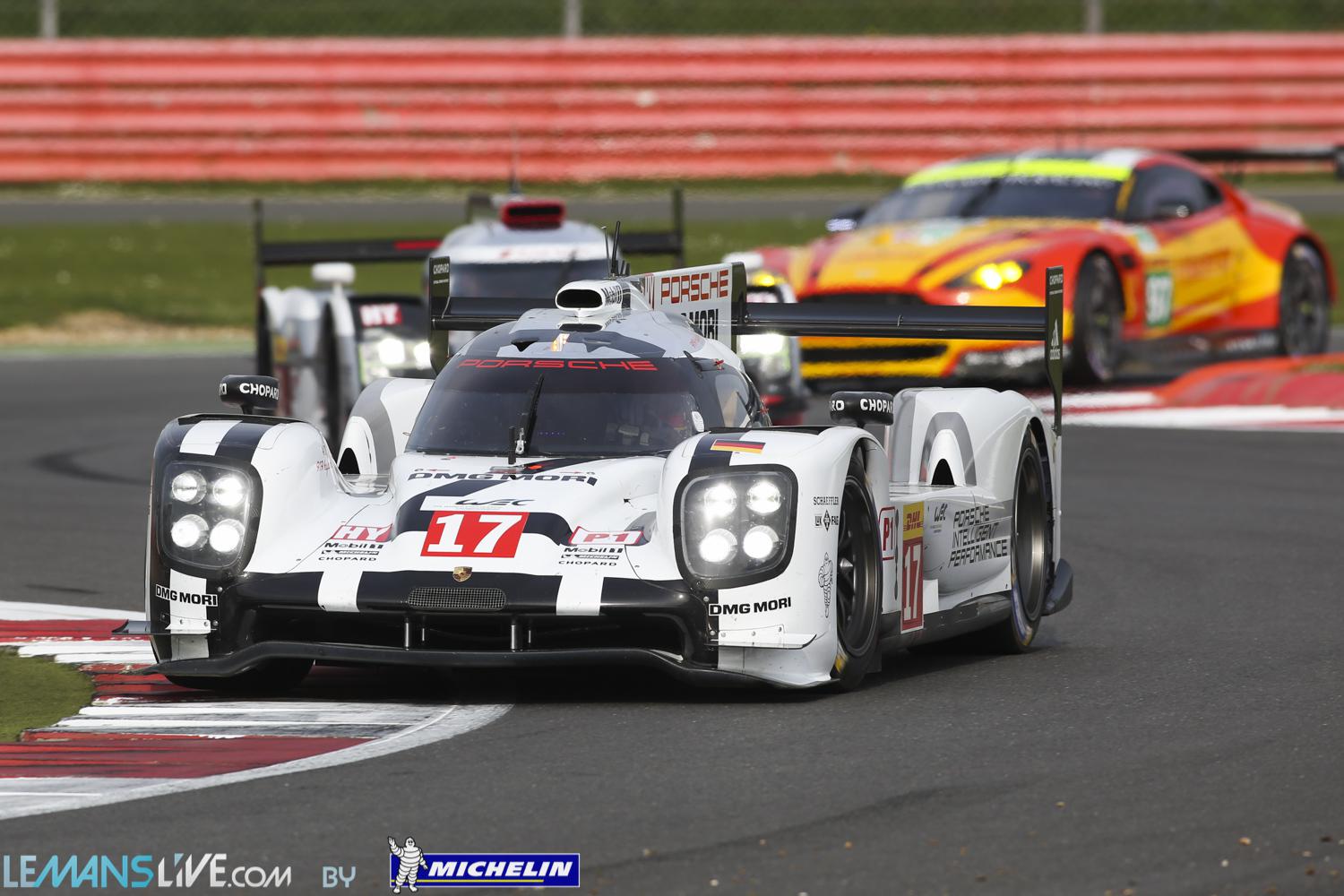 In what seems to be all of the LMP1 constructors ‘home race’, it was the #17 Porsche of Brendon Hartley, Timo Bernhard and Mark Webber who took 25 points away from the 6 Hours of Nürburgring in a gruelling, long and hot race.

Here’s the hour by hour report.

In LMP1, Neel Jani in the #18 Porsche held the lead for the whole hour until he came in for his stop to be replaced by Marc Lieb in a dominant performance as he stretched away from the #7 Audi of Marcel Fässler and the #17 Porsche of Timo Bernhard as temperatures rose at the Ring. Alex Imperatori’s Rebellion stopped on lap 1, and has remained in the pits ever since, and when Nick Heidfeld stopped just outside the pit lane in the #12 car, it completed a dismal first hour for the Swiss team.

In LMP2, the KCMG car of Nick Tandy built up and maintained a comfortable lead from the #26 and #28 G-Drive Ligier’s of Sam Bird and Luis Felipe Derani.

Elsewhere, there were problems for the #51 AF Corse Ferrari of Gianmaria Bruni, the reigning world champion who was leading in GTE Pro as he had to stop at the Dunlop Kurve with an electrical problem, dropping right to the back of the field, at at the hour mark he was 6 laps down on the #99 Aston Martin of Richie Stanaway.

The winner of the LMP1 category of the 24 Hours of Le Mans, Earl Bamber led the GTE Am category in his #99 Porsche.

Marc Lieb has a tumultuous hour at the front before handing over to Brendon Hartley, nearly losing the lead to the sister Porsche of Mark Webber and almost colliding with the Australian in the process of defending, after he was hauled into pit lane due to a technical infringement, which resulted in the award of a 5 second penalty; however both Porsche have kept a safe gap to the Audi of André Lotterer, who took over the wheel from Marcel Fässler. The #12 Rebellion rejoined the race with Nico Prost taking over from Nick Heidfeld, who stopped in the first hour.

In LMP2, the G-Drive Ligier of Roman Rusinov took the lead from the KCMG of Matthew Howson, but he is closing in on the Russian quickly.

No dramatic changes in either of the GTE catagories.

It was all change in the LMP1 category as the #18 car of Romain Dumas suffered 90 seconds worth of penalties for excess fuel consumption, leading to the assumption that the Porsche is suffering with a sensor problem, dropping the Frenchman down from 2nd to 4th, nearly 2 laps down on the leading #17 Porsche of Timo Bernhard who leads the #7 Audi of André Lotterer and #8 Lucas di Grassi, although di Grassi did hold the lead briefly when both the #17 and #7 cars pitted. Lotterer had some fun with the GT cars, being held up by 4 of them on the run down to the Dunlop Kurve, losing valuable seconds to Bernhard and di Grassi. The leading privateer car of the #4 ByKolles suffered a spectacular rear wing failure on the pit straight, with Pierre Kaffer doing well to keep it out of the battle for 2nd in the GTE Pro category.

In LMP2, the #31 of Ed Brown had a big spin at the Veedol chicane, dropping down to last in the category, as the #47 KCMG of Matt Howson regained the lead from the #26 Ligier of Roman Rusinov, with a great overtaking move at the Mercedes Arena section.

In GTE Pro, Richard Leitz still leads in his #91 Porsche, as the 2nd and 3rd place cars of the #71 Ferrari and the #92 Porsche have been having a big scrap, with James Colado in the #71 overtaking the #92 of Makowiecki.

In GTE Am, Rui Aguas had a moment after the Veedol, losing the car and careering onto the grass, but he managed to save it from the barriers before handing over to Emmanuel Collard.

The #17 Porsche held the race lead at the hands to Timo Bernhard, who handed over to Mark Webber towards the end of the hour from the #7 Audi of André Lotterer and the #8 car of Oliver Jarvis in a quiet stint of the race. Meanwhile, the recovering #18 Porsche of Neel Jani was lapping with incredible consistency, and he closed the gap to 3rd to just 20 seconds.

In LMP2, the #47 KCMG car of Richard Bradley (who took over from Matt Howson) led from the #28 G-Drive of Ricardo Gonzalez and the #26 G-Drive of Julien Canal, who closed in on the #28 at the end of the hour.

In GTE Pro, the #71 Ferrari of Davide Rigon battled with the #92 Porsche of Patrick Pilet for 2nd, but Rigon suffered a puncture and thus had to stop. The #91 Porsche of Richard Leitz led for the whole hour.

Meanwhile in GT Am, Patrick Long led in the #77 Porsche, but suffered the outrageous misfortune of his window exploding and blowing away, but didn’t have a door change, and will wait until his next stop.

In LMP1, the #17 Porsche of Brendon Hartley leads the #7 Audi of Ben Tréluyer by 1 whole lap, who is struggling with some sort of problem with grip and that means the #8 Audi of di Grassi and more importantly, the #18 Porsche of Neel Jani is closing.

In LMP2, Richard Bradley leads in the #47 KCMG by a lap, the #26 G-Drive of Julien Canal is 2nd. The #36 Alpine of Vincent Capilliaire spun in almost identical fashion to Ed Brown in the 3rd hour at the Veedol chicane. The #42 Strakka car receives a 1 minute stop and go penalty for speeding in the pit-lane.

In GT Pro, the #91 Porsche of Michael Christensen still leads from the #92 Porsche of Frédéric Makowiecki.

Patrick Long came in for his door change in GT Am and drops to 4th. Andrea Bertolini in the #72 Ferrari overtakes the #98 Aston Martin of Paul Dalla Lana for the lead at the Castrol-S.

Hour 6 – The Final Showdown at Sundown

As the clock ticked down to under an hour and the sun started to set, the #17 Porsche of Mark Webber was still out in front, and it stayed that way, Webber picking up his first WEC win along with Brendon Hartley and Timo Bernhard. The #18 Porsche continued its incredible fightback, with Neel Jani taking 2nd off the Audis when they pitted, to wrap up a fantastic day for the German manufacturer. For the other German manufacturer, it was more a case of tactical thinking, the #8 car of di Grassi finding problems with 10 minutes to go, releasing Jani. So, Wolfgang Ullrich told the Brazilian to let the #7 car of Lotterer through for the sake of the drivers title, and the German took 3rd, to his slight disappointment as he eluded to in a mid-race interview.

In LMP2, the #47 KCMG of Tandy, Howson and Bradley won by a lap, just as convincingly as Webber, and this may urge them to enter two cars for next year’s championship. The 2 G-Drive Ligiers of #36 and #28 took the remaining podium spots.

Porsche took another 1-2 in the GTE Pro class, with the #91 car of Richard Leitz and Michael Christensen leading the #92 car and the #71 Ferrari, but not of Gianmaria Bruni and Toni Vilander after they had troubles in the first 15 minutes.

Ferrari did take the GTE Am win though, with Victor Shaytar, Andrea Bertonlini and Aleksey Basov guiding the #72 car to victory from the #98 Aston and the #83 Ferrari.

The European season is over, next stop: COTA in September.