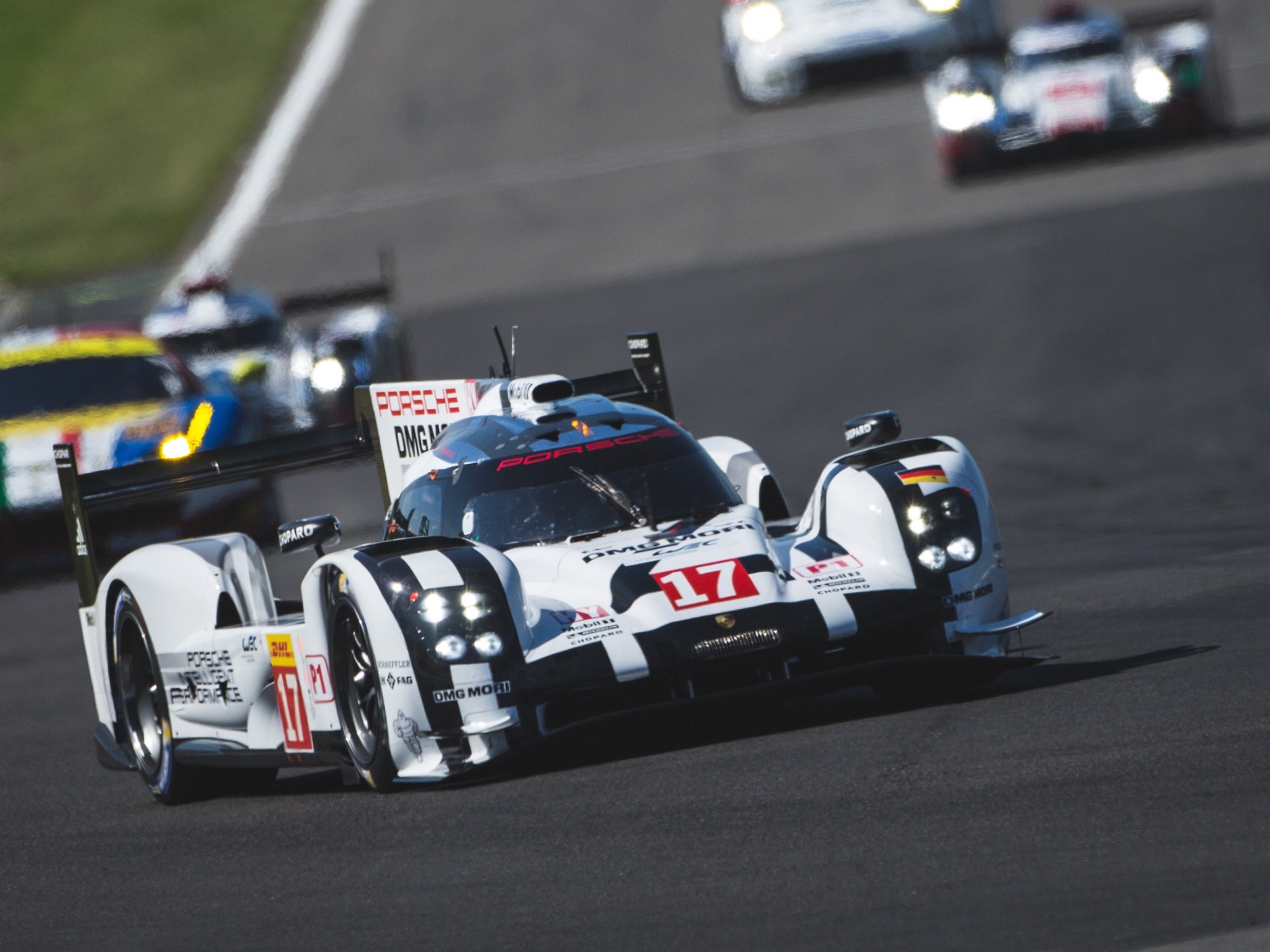 The fifth round of the 2015 FIA World Endurance Championship threw up plenty of late drama as the #17 Porsche of Mark Webber, Brendon Hartley and Timo Bernhard took 25 points away under the lights of the Circuit of the Americas in Austin, Texas.

The #18 Porsche of Neel Jani, Roman Dumas and Marc Lieb had initially taken the lead after 4 hours from the #17 car, but was forced into the garage with just 30 minutes left of the race thanks to an unknown electrical problem. This also promoted the #7 and #8 Audis into the podium positions, even thought they’d struggled for pace all weekend in their Le Mans spec car.

Webber took the lead instantaneously from Jani after the green flag fell and began to stretch out a comfortable lead, the gap up to 1o seconds when the Australian came in for his first stop around the 50 minute mark. The #1 Toyota with Sebastian Buemi at the wheel spent most of the early exchanges battling with the #7 Audi of André Lotterer for 4th place, a long way back from where the Belgian/German Audi driver wanted to be; he eventually got the better of the former Toro Rosso Formula 1 driver with a bold move round the outside of the long Turn 17.

And after Webber handed responsibility to Kiwi Brendon Hartley, the 25-year-old continued where he fellow Antipodean left off, pulling out a gap of 20 seconds by the end of the second hour. But, there was a big blow for the #17 car as Mark Webber faced investigation from the stewards after too many people were deemed to be working on the car at his stop, all but gifting the #18 car the lead. The second Toyota, the #2 car of Brit Mike Conway endured a tumultuous time midway through the race, first spinning after slight contact with the #88 Porsche of Earl Bamber, however he managed to recover superbly. His luck ran out though shortly afterwards, as he lost traction coming out of Turn 11, slamming the car into the barriers and out of the race from sixth position.

In P2, the #26 G-Drive Ligier of Sam Bird, Roman Rusinov and Julien Canal fought back to beat the #47 KCMG in the final few hours, with plenty of action elsewhere in the category. Gustavo Yacaman in the #28 G-Drive spun out of third place before Ed Brown in the #51 ESM brought out the first Full Course Yellow of the evening, after losing his brakes at the final corner and hitting the barriers heavily. Jonny Kane in the #42 Strakka car had his troubles as well, making an unforced error but recovering, in a dismal race for the British privateer team. Nico Lapierre in the #47 KCMG suffered the indignity of having to serve a final hour drive-through for a minor pit infringement, but still comfortably held on to second from the #28 G-Drive.

Most of the on-track action came in the two GTE classes, with the #91 Porsche and the #72 Ferrari triumphing in Pro and Am respectively. The high point in Am was the early battle between the #88 Porsche of Bamber and the #72 car of Andrea Bertolini; Bamber having that contact with the P1 of Conway but still producing a glorious pass on the Italian after the never-ending back straight, where many drivers received warnings for exceeding track limits. Patrick Dempsey’s #77 Porsche car looked set to follow-up two brilliant results at Le Mans and the Nürburgring with a win at home, however late race pace evaded the former Gray’s Anatomy star’s team, gifting Viktor Shaytar’s #72 Ferrari a comfortable win from #88 of Bamber. Emmanuele Collard and Christian Ried had a lengthy and pulsating battle for 3rd of which the Italian won, but not after another superb pass at Turn 12.

And so, unfortunately due to penalties and mechanical faults the race was decided, with Hartley taking the chequered flag from a flying Lotterer and Lucas di Grassi. This ensures that the #17 car takes another 7 points out of the #7 Audi’s championship lead. The final 3 rounds look set to throw up a scintillating climax to this year’s championship.