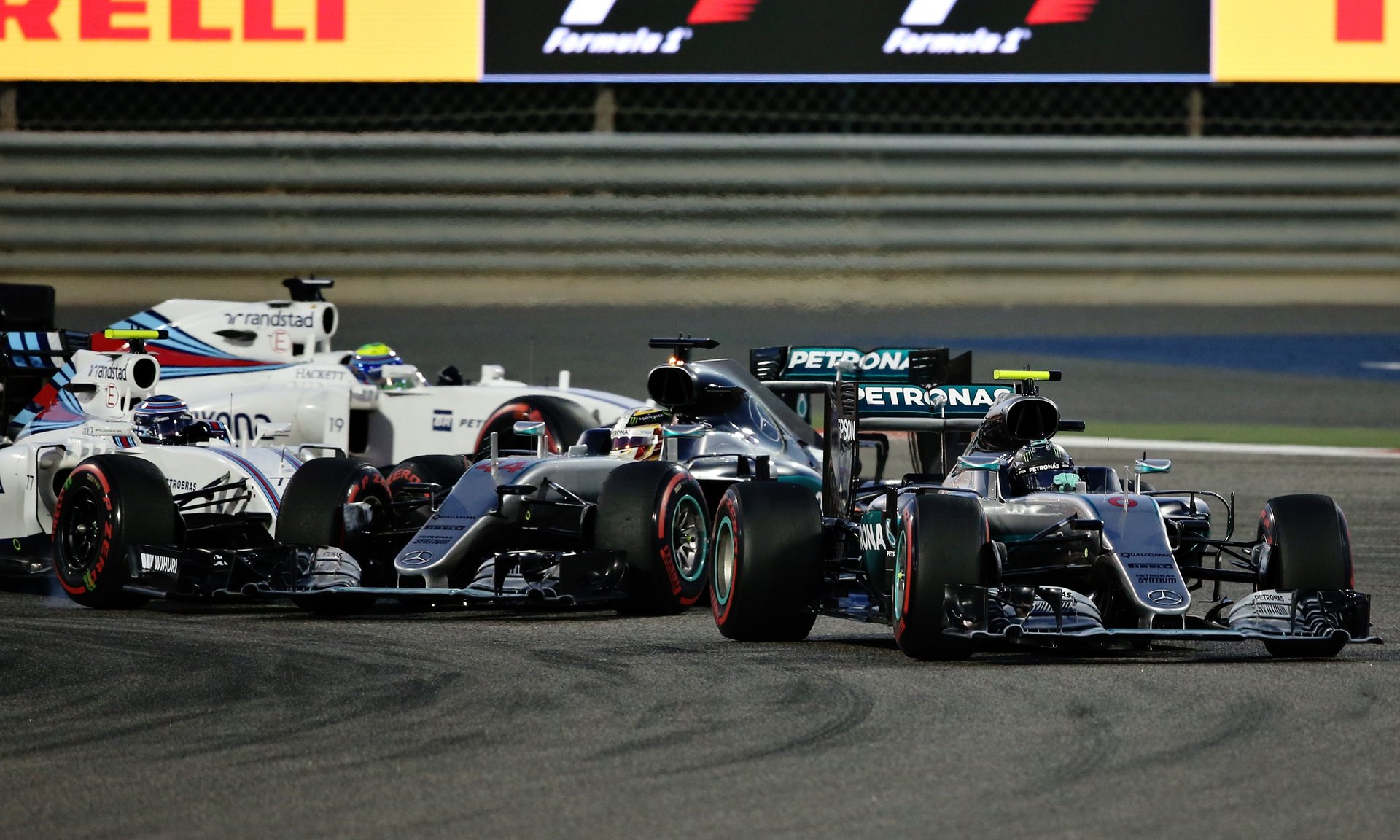 Under the lights in Bahrain, Nico Rosberg kept his cool in the desert to take his fifth successive race win, to open up a big gap at the top of the World Championship and continue his 100% start to the season.

Although, like Melbourne, Rosberg’s Mercedes team mate Lewis Hamilton claimed pole position in the ever fractious and farcical new for 2016 Qualifying format, the reigning World Champion struggled off the start, with Rosberg leapfrogging him from lights out.

On Thursday, Fernando Alonso was declared unfit to race by medics after suffering three broken ribs and a small collapsed lung in his horrific Melbourne shunt, so last year’s superstar of GP2 and McLaren reserve, Stoffel Vandoorne was drafted in to deputise.

Meanwhile, Sebastian Vettel didn’t make the start either – his Ferrari engine expiring on the formation lap, cocooned in a barrage of smoke. It meant the German lost the chance to take the fight to both Hamilton and Rosberg from third.

The pre-race drama was certainly matched by the start drama. Hamilton, slow off the line lost ground to Rosberg before being clouted by the Williams of Valtteri Bottas at Turn 1 – dropping to ninth. Both the Mercedes and the Williams lost part of their front wings as a result. Joining them was Daniel Ricciardo, the “Honey Badger” getting a bit too close to the fracas and losing his endplate in the process. Rosberg scampered away, pursued by Felipe Massa, Bottas,  Kimi Raikkonen, the ever impressive Haas of Romain Grosjean, Hamilton and the sister Haas Esteban Gutierrez.

While Rosberg edged away at the front, Hamilton started his comeback – dispatching of the low points runners and eventually getting past Bottas cleanly for 3rd. Further down the field, Jenson Button pulled over with an ERS failure from a solid eighth place.

After the friction of Melbourne, the two Toro Rosso’s endured a quieter weekend. Carlos Sainz struggled with his car before retiring on lap 31, whereas Max Verstappen quietly went about his business, even running in fourth before his final pit stop. The Dutchman ended up coming home in sixth, ahead of the Red Bull of Daniil Kvyat, who tried to go for a strategy focussing on longevity – to mixed success.

In the sole remaining McLaren, Vandoorne impressed on his long-awaited debut, showing good racecraft and a surprisingly competitive pace in the Honda powered car. But try as he might, he couldn’t hold off both of the Williams cars until the end, but still scored McLaren’s first points of the season in tenth. It was a superb advert for his services, giving McLaren something to think about for 2017 and beyond.

Rosberg reigned supreme, keeping the gap to Raikkonen and carving through the back-markers. Towards the end of proceedings, his race engineer Tony Ross tried to remind him of the gap – but the German was having none of it, asking for information to be fed to him “every 4 laps or something”.

Once again, after a sensational debut in Australia, Romain Grosjean continued to exceed all expectations, guiding his Haas car into a superb fifth place, one better than Melbourne. It’s a result that takes him up to fifth place in the Driver’s Championship, the highest he’s ever been in 5 and a half seasons of F1.

The undisputed driver of the day was Pascal Wehrlein in the Mercedes powered Manor. After a whirlwind start to his race on debut in Australia, the Mercedes reserve driver continued his fine form, showing he was no stranger to an overtake, spending a lot of his race battling the struggling Force Indias and the Saubers – in financial turmoil – in the midfield.

But the man who came away with the biggest smile was undoubtedly Rosberg, as he took the flag from Raikkonen and a frustrated Hamilton. The German wore a Cheshire cat grin on the podium, knowing he’s the man to beat in the early stages of the season. 50 points out of a possible 50 confirms that.