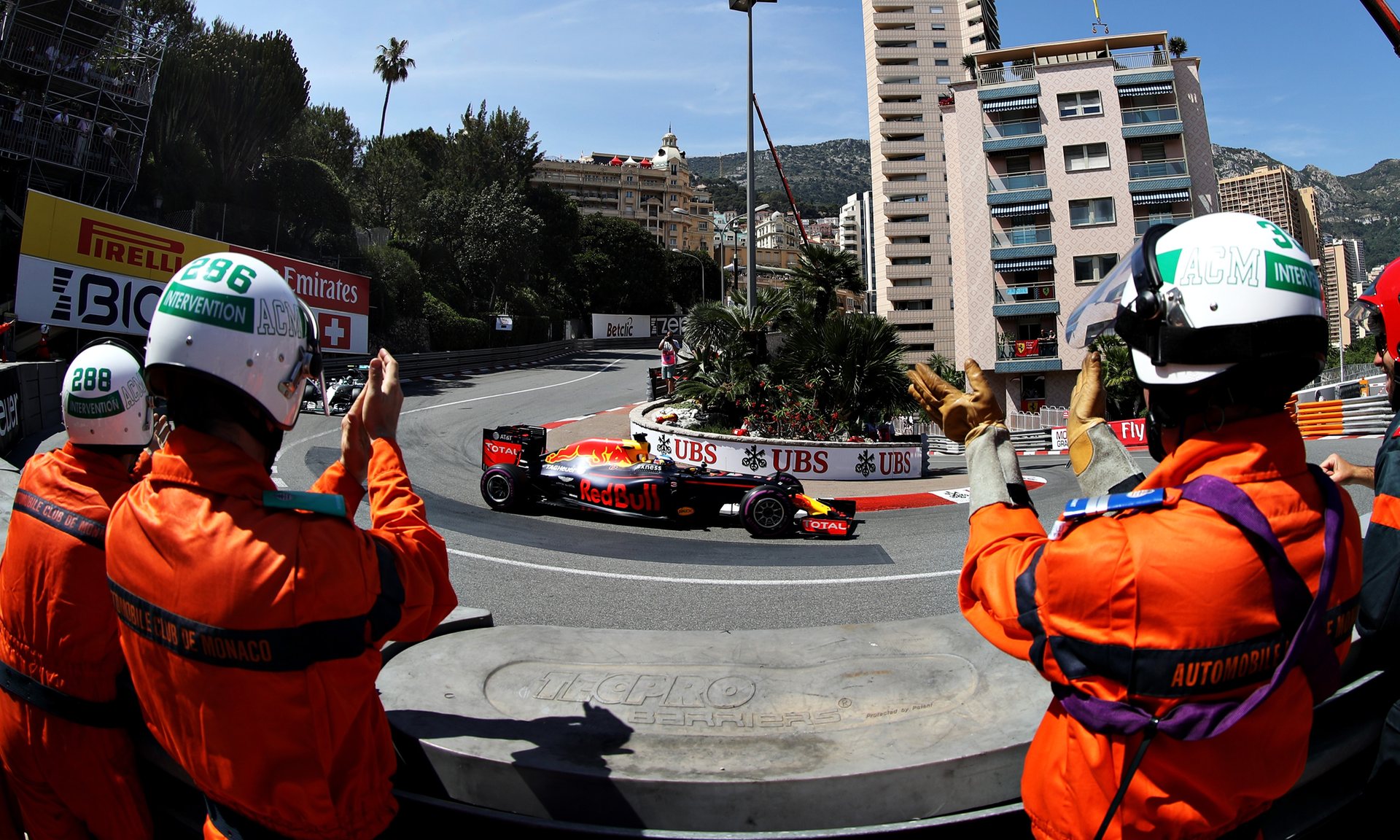 After just over an hour of gripping qualifying action, it was Red Bull’s Daniel Ricciardo who pulled out all the stops to halt Mercedes’ iron grip on pole position around the streets of Monaco and grab his maiden pole, on his 94th attempt.

A stunning lap of 1.13.622 from the Australian was enough to fend off the attempts of both Mercedes drivers, Nico Rosberg and Lewis Hamilton, who followed in 2nd and 3rd. Although, Hamilton’s hour was again disrupted by technical problems – not session ending this time.

In the sunny Riviera conditions, Qualifying 1 claimed two scalps. Felipe Nasr’s Ferrari engine in his Sauber cried enough, meaning that he starts right from the back. Joining him is the hero of the Spanish Grand Prix a fortnight ago, Max Verstappen cutting the high-speed chicane of Turns 15 and 16, clipping the inside wall and breaking his track rod, rendering him a passenger as his Red Bull nestled in the armco; thus bringing out the second red flag of the session. It wasn’t the first time the Dutchman had a collision with the barriers, also making contact with them in FP3.

Both Renaults struggled to make it out of the first session, the car’s balance looking all out, as Jolyon Palmer fell foul of the cut off point and starts 18th. Kevin Magnussen meanwhile lines up 16th.

The second session saw a shock on the cards. Both Williams cars of Valtteri Bottas and Felipe Massa couldn’t break the Grove team’s curse around the street circuit, only able to capture 11th and 14th respectively. The last time a Williams made it into Q3 around here was Pastor Maldonado all the way back in 2012.

Jenson Button will be hoping that 13 is a lucky number for him, whilst McLaren team mate Fernando Alonso snuck into the top ten shootout.

And so to the last session, which started out with Hamilton suffering with reported fuel pressure problems, delaying his foray out onto the track as he was pushed back into his garage. He did make it out with 5 minutes to go, as his nearest rivals thrashed around warming up the new for 2016 Ultra-Soft compound.

The affable Honey Badger set a blistering time to throw down the gauntlet to Messrs Rosberg, Hamilton, Vettel and Raikkonen – who was hit with a 5 place grid penalty due to a gearbox change. Hamilton looked as if he’d take the pole after a series of cautious warm-up laps but a slight mistake in the final corner halted his charge, and he could only set a time three tenths off of the Australian. Rosberg’s last throw of the dice was next; he trumped Hamilton, but not Ricciardo who had survived to take Red Bull’s first pole since the Brazilian Grand Prix of 2013.

Post-session, Ricciardo credited the set up of the car, happy with the way it’s balanced and also with the performance of the new upgraded TAG branded Renault PU.

As for Sunday, the possibility of rain tomorrow will be playing on the mind of the front runners, and may play into the hands of the likes of Verstappen and Raikkonen. If it does stay dry, Ricciardo will start of the Super-Softs, the tyre he set his best time in Q2 on. One would then presume he’s going for a longer first stint. But, anything can happen in F1’s glamour spot.