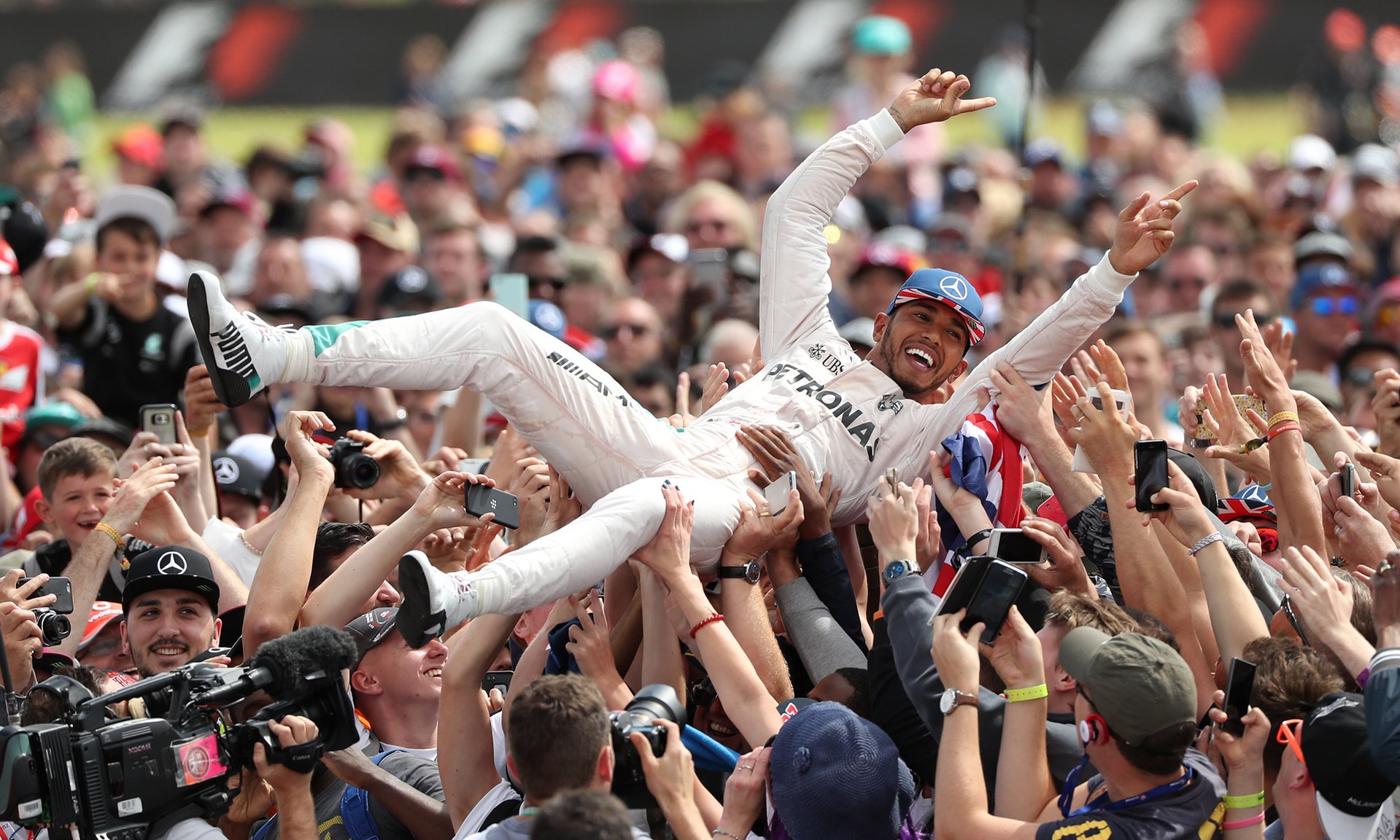 After 47 racing laps in changing conditions at Silverstone, Lewis Hamilton dominated proceedings to earn his third consecutive British Grand Prix victory, his fourth overall in his glittering F1 career. He now is level with Nigel Mansell and lies one away from equalling Jim Clark’s 49-year-old record for most British Grand Prix wins.

Hamilton finished 6.9 seconds ahead of ailing team mate Nico Rosberg, who may suffer a second penalty in as many weeks for a breach in radio communication rules after suffering with gearbox troubles. Max Verstappen fought bravely, and earned the admiration of the 150,000 plus crowd with a gutsy and spectacular drive to third.

In beautiful conditions on Saturday, Hamilton easily claimed pole, breaking the Qualifying record for this Silverstone layout for good measure in Qualifying 2. Although he piled the pressure on himself, running wide at Copse and suffering the ignominy of getting his lap time deleted – he wasn’t the only driver to fall foul of that rule though – the home crowd favourite set a stunning lap time in the dying seconds, that was three tenths faster than Rosberg. No such luck for the other British drivers, both Jolyon Palmer and Jenson Button, in his 17th visit to Silverstone, crashed out in Qualifying 1. Button cited trouble with his rear wing, surprised at even getting 17th on the grid.

Turn the clock forward 23 hours, and the conditions are the polar opposite. The typical British summer had been lenient with Northamptonshire and Buckinghamshire, the rain couldn’t quite be classed as torrential. But still, it was enough to warrant full wets and a Safety Car start – to the dismay of many. It does raise a pertinent point though, is there a point to Pirelli developing an extreme wet tyre, with most of field opting for intermediates when the Safety Car comes in. And also, you feel that 22 cars doing around 100 mph on average over the lap on deep treaded tyres would clear the track quicker.

After five laps, that’s exactly what happened, as a barrage of midfield runners, including Sebastian Vettel – hit with a five place grid penalty yesterday after his new gearbox failed in Practice 3 – came in to the pits in order to go onto the green walled tyres. The top four of Hamilton, Rosberg, Verstappen and Daniel Ricciardo all stayed out, followed by Sergio Perez. That proved to be the correct decision, last week’s surprise package Pascal Wehrlein spinning his Manor at the slippery Turn 1 and beaching it in the gravel trap. That summoned a Virtual Safety Car, the top five used it to pit.

The move to slicks would be a bold move, with standing water still visible in places where you wouldn’t want to make a mistake, even with plenty of forgiving run off areas lining the skirts of the circuit. Turn 1 continued to catch out drivers of all ability and experience, but some could catch the car more masterfully than others. This continued even when slicks were worn and 95% of the track was bone dry. Turn 1 refused to conform.

The two Ferrari drivers were the first to make the call, Vettel in first for a set of medium tyres. Last year he got his strategy to perfection in order to get a podium, this year he wasn’t so lucky, also spinning at Turn 1 after running wide. Kimi Raikkonen, with he Ferrari future secured for 2017 had two excursions at Turn 1 on his way to 6th with a quiet drive, spending most of it looking at the back of Perez’s Force India.

The best battle on track was between Verstappen and Rosberg for second. The German was powerless to stop the young Dutchman pulling off another jaw-dropping overtake around the outside of him at Chapel, demonstrating the supreme cornering ability of the Red Bull car. Rosberg desperately looked for a way through, knowing that he has to work on building his faltering reputation when it comes to wheel to wheel action. But, Verstappen placed his Red Bull to perfection time after time, defending stoically even with his rear tyres giving up on him. After a nip and tuck battle over the course of 11 laps, Rosberg finally edged past with a bold move of his own into Stowe, finding the dry line to swing his car round leaving Verstappen high and dry.

However, Hamilton was leaving everyone high and dry. Bar a little wiggle at Turn 1 which he caught well (however Verstappen and Nico Hulkenberg claim the flair prize for this week), he put in a faultless drive. Rosberg’s car however was not faultless, leading to his second flashpoint in two races. Suffering with a gearbox issue, Rosberg was given instructions by his race engineer Tony Ross on how to help the problem, including being told to switch to “Default Chassis mode 01” and to avoid using seventh gear. At the time of writing, the championship leader is in discussion with the stewards, with the paddock divided over whether it was legal or not.

He came across the line in second, with Verstappen unable to find a way back past, even with Rosberg limping. But Hamilton brought the crowd to their feet, even finding time on his 52nd and last lap to acknowledge their support with a few waves before crossing the line and taking the chequered flag to a rousing cheer. It meant that Rosberg’s championship lead was slashed down to just four points, and depending on what action, if any, the stewards take in the light of Rosberg’s incident, he may draw even closer or even take the lead of the driver’s standings for the first time this year. Not many would’ve predicted that it would take him this long. He was not riding the crest of a wave figuratively, but literally, being given the crowd-surfing treatment by the fanatical as ever British crowd.

On the podium, the cheers for Hamilton were followed by jeers for Rosberg, maybe out of spite for the hostility that Hamilton suffered in Austria.

Needless to say, it looked petty.