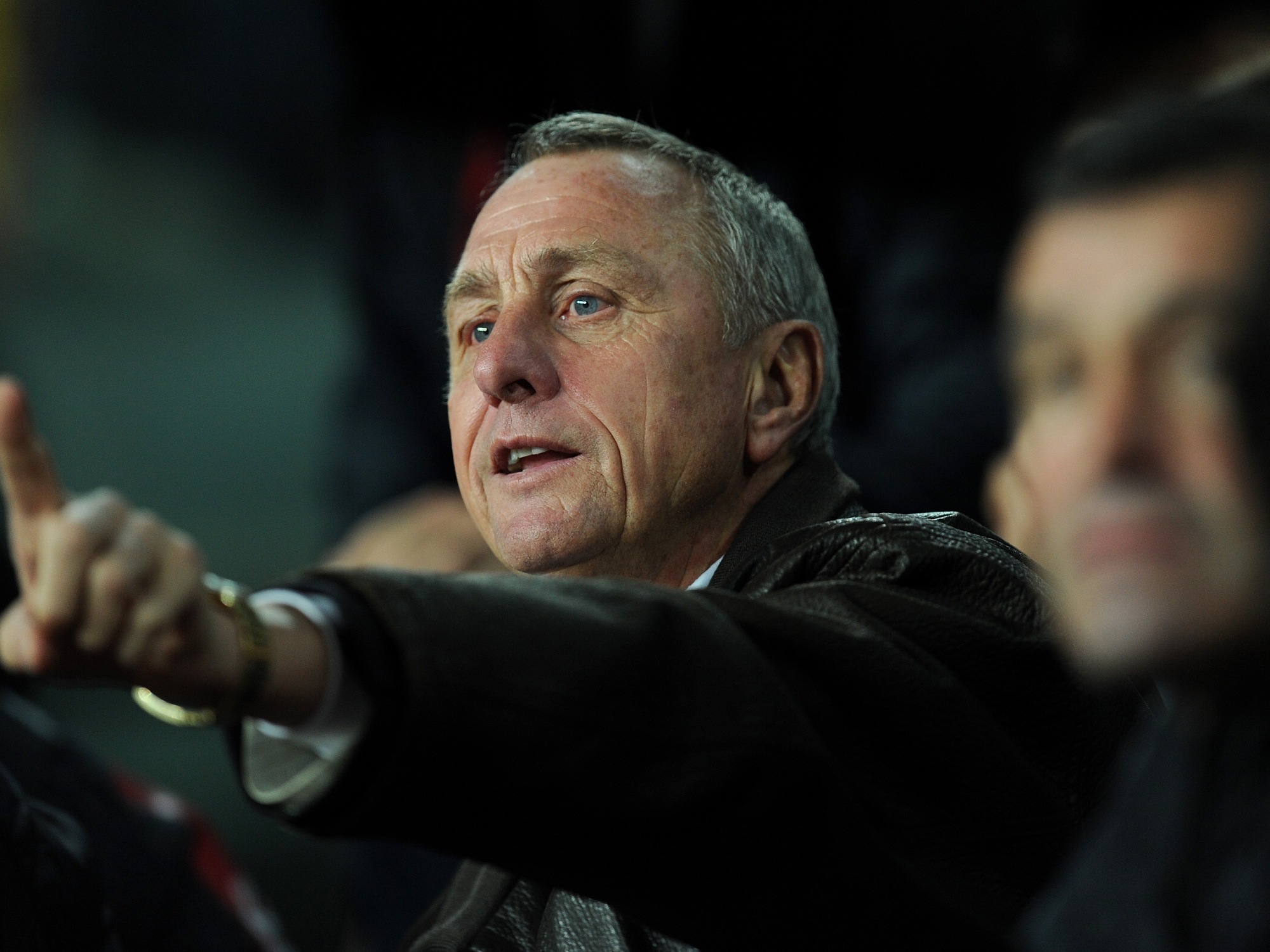 Unfortunately, this post is now a tribute to the late, great master of Total Football. One of the best and most influential players of all time. And a fine manager to boot. A man who instilled the basis for the philosophy that has helped Barcelona dominate football for the past decade; without him, there’s a small chance that Xavi and Andres Iniesta wouldn’t have thrived as much as they have in their glittering careers, so complimentary is the system to their talents. Or vice versa, however you wish to look at it. Pep Guardiola, arguably Barcelona’s greatest modern day manager, said that Cruyff merely “painted the chapel” and other managers since have either “restored it or improved it”.

Attack, attack, attack was his ideology, and to play aesthetically pleasing, yet seemingly simple football. “Playing football is very simple, but playing simple football is the hardest thing there is.” He had a unique insight on the game, and his quotes grabbed your attention not only for their distinctive arrogance, but tongue in cheek truth. After all, how many times have you seen a bag of money score a goal? Fabian Delph aside…

And how could we forget his majestic talents when he wasn’t barking orders in between puffing away at a cigarette – or lollipop – on the touchline.

The inventor of the “Cruyff Turn”, a smooth action composed of a fake, a twist of the body and a caress of the ball from the inside of his wand of a right boot.

A move that is still being taught to kids this very day. I know I’ve certainly used it.

A move so beautiful and iconic that the unfortunate man on the end of the move, Sweden’s Jan Olsson said it made his unspectacular career memorable, such was the gravitas of Cruyff’s genius. Former players, teammates, managers, pundits and admirers have compared his graceful style to an artist, coaxing their brush along a blank canvas to eventually create a masterpiece. There’s hardly a finer description and comparison.

He was the spearhead in Ajax and Holland’s footballing revolution in the 1970s, where possession, or most importantly smart possession was the idea. “Quality without results is pointless. Results without quality is boring.” Under the management of the legendary Rinus Michels, Ajax were raised back up from obscurity, promoting the idea of Total Football. He helped Holland to a World Cup Final in 1974, where they were thwarted by the ruthless efficiency of Franz Beckenbauer’s Germany after emphatically triumphing over Argentina, East Germany and Brazil.

He continued to innovate after his move to Barcelona. Not only did he notch two goals against Granada on his debut, alleviating the pressure coming from the demanding fans, but he also scored what’s been described as “Cruyff’s Impossible Goal” against Atletico Madrid in 1973/74. After a cross looked to have evaded everyone at the far post, Cruyff acrobatically leapt and twisted in mid-air, before impudently flicking his right heel at the ball – now up to what would normally be deemed as over shoulder height – and past a dumbfounded Miguel Reina. Cuauhtemoc Blanco came close to replicating it at France ’98 for Mexico, but it just wasn’t the same.

After unhappy and short spells at the LA Aztecs and Levante, Cruyff returned to his spiritual home, Ajax. He won the league title again and pulled off that penalty with Jesper Olsen. Another mark of his supreme confidence with a ball at his feet.

Controversially, after his contract at Ajax wasn’t renewed, he ended his career at rivals Feyenoord, where he typically inspired them to their first Eredivisie in a decade, also winning the Dutch Cup in the same season.

In 1985, coach Cruyff was born. Ajax and Barcelona are the richer for it. Especially the latter, as it was the idea of Cruyff that sparked the invention of “La Masia” the Catalan’s world renowned youth academy and answer to Ajax’s equally prestigious academy, where the likes of Pep Guardiola, Johan’s son – Jordi, Xavi, Iniesta, Gerard Pique, Carles Puyol, Cesc Fabregas and of course Lionel Messi all spent their junior careers. Hardly a place where a gem is only found every ten or so years.

He carried Michels’ idea of Total Football wherever he went, his sides continuing to dazzle all the teams where they played under his watchful eye. The eye of a man who understood the very ebb and flow of football.

A day of mourning in his native Netherlands will be extended into the national team’s now irrelevant friendly against France. The game is set to be stopped in the fourteenth minute – related to his shirt number – for a silence and then no doubt rapturous acclaim from the Oranje fanbase. The sixth greatest Dutch person of all time (as voted for in 2002) brings the country to a standstill once again, for the wrong reason this time.

Cruyff was diagnosed with lung cancer in October last year, credited to his chain smoking habit which forced him into having open heart surgery in 1991. Only then did he realise how careless his trait had become. “Football has given me everything in life; tobacco almost took it away”. That’s when he switched to the lollipops on the touchline. Again, unique to him.

He sounded typically brash about his battle, ensuring his millions of fans that the illness would not get the better of him – claiming he was “2-0 up in the first half”. Tragically, the final result isn’t one he (or indeed everyone) would have been proud of.

His legacy will live long in the memory. After all, he did say he was immortal, in a way.