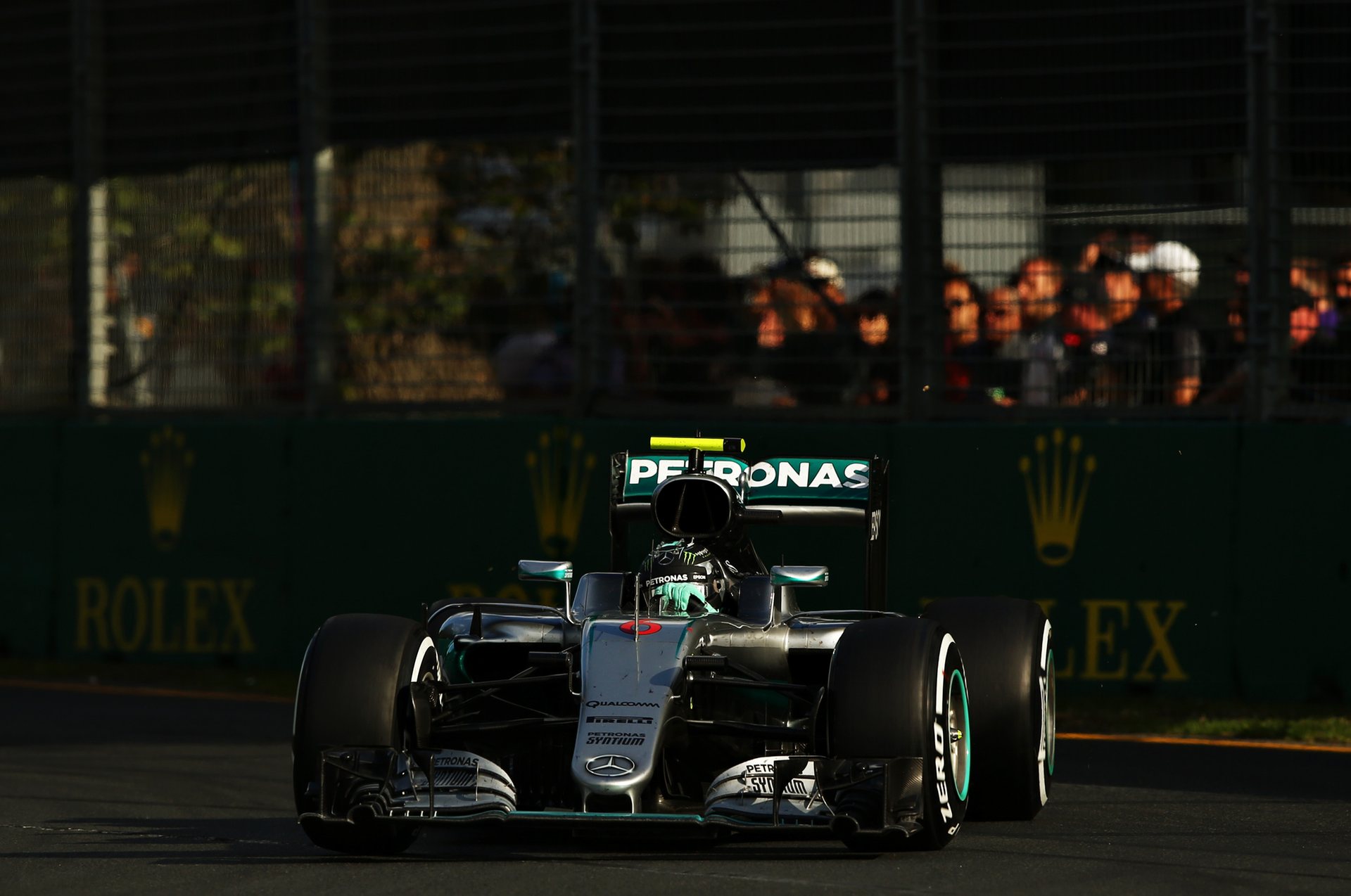 Nico Rosberg and Mercedes started the new season where they left off the last, with a win and a 1-2, as Rosberg led home team mate Lewis Hamilton ahead of the Ferrari of Sebastian Vettel in an action packed Australian Grand Prix.

Vettel and Ferrari had taken the lead courtesy of a poor start from both Hamilton and Rosberg, before a colossal shunt between the McLaren of Fernando Alonso and the Haas of Esteban Gutierrez brought out a red flag, turning the race on its head.

Hamilton did top all three practice sessions on Friday and Saturday as well as taking a commanding pole position from Rosberg in a farcical Qualifying session, but couldn’t carry that form into a race win.

All eyes were on the new for 2016 Qualifying “elimination format” and how it would work. Long and the short of it, it did anything but work. Teams and drivers getting caught out by the clock and tyre allocations, leaving the last three minutes of the final session action-less, as pole had already been decided. So much for solving the excitement factor. No surprises that it will most likely be scrapped for Bahrain onwards, proving that knee-jerk reactions don’t really work.

The stand out performance on Saturday aside from Hamilton, was undoubtedly Max Verstappen, who coaxed his Ferrari powered Toro Rosso to an excellent 5th on the grid, behind both Ferraris and Mercedes.

At the opposite end of the grid, Daniil Kvyat was the first major casualty, only managing 18th as he was beaten by the clock. To make matters worse for the Russian, he ground to a halt before he could reach his grid position on the formation lap, causing an aborted start and thus a 57 lap race. Kvyat didn’t return to proceedings, despite the efforts of his Red Bull team.

When the 2016 season did get underway, both Hamilton and Rosberg suffered sluggish starts, Hamilton even dropping to sixth as Vettel and Raikkonen led the field away from turn 1. By the end of the first lap, the two Ferraris led from Rosberg, Verstappen and Felipe Massa. At the tail end, débutante and reigning DTM Champion Pascal Wehrlein hauled his Manor car up to an impressive 14th from stone dead last.

Hamilton started to attack from the off, twisting Massa this way and that into Turn 3, before forcing his way past round the outside of Turn 4 for 5th. Williams’ early afternoon didn’t exactly improve, Carlos Sainz breezing past Valtteri Bottas – who’d incurred a grid penalty for changing his gearbox – with the help of DRS to move into the points.

The turning point of the race occurred on lap 17, Alonso catching the tow of Gutierrez, before lining up a move on the outside of Turn 3, but under braking caught up to the Mexican at an alarming rate, clattering the right rear of the Haas before somersaulting through the gravel trap, coming to rest upside down just shy of the tyre wall. Mercifully, the Spaniard walked away gingerly but with no injuries, waving to the crowd in relief – refusing to blame Gutierrez, citing it as “a racing accident”.

After a twenty minute stoppage to the race, the red flags were withdrawn and the dynamic of the race dramatically changed, Mercedes opting to fit the more conservative medium compound tyre on both Hamilton and Rosberg’s cars whilst the two Ferraris switched back to the attack based super soft tyre. It proved to be the wrong decision, Vettel failing to break the clutches of Rosberg who drove beautifully to maintain a two second gap, as Kimi Raikkonen ended his quiet race from 4th with fire blazing from his airbox. The Finn deduced over the radio that he’d “broke something”.

There was more trouble for Ferrari powered cars, Marcus Ericsson inflicting the wrath of the stewards, earning a drive through penalty due to his mechanics working on the car 15 seconds before the end of the red flag period. The Swede eventually retired on lap 42.

The battle between the two Mercedes and the sole remaining Ferrari ensued, Hamilton having cleared both the Toro Rossos before setting his sights on home favourite Daniel Ricciardo at a rate of knots. Meanwhile, Vettel suffered the ignominy of a slow pit stop, relegating him to 4th on lap 35. Hamilton cleared Ricciardo, and started to bear down on team mate Rosberg, setting the fastest lap of the race.

It wasn’t enough, Rosberg building his pace up towards the end as Vettel’s soft tyres wore in, setting up a tense finale between himself and Hamilton, the Briton with an entirely different challenge on his hands. With less than 10 laps left, Hamilton locked up at Turn 9, sacrificing his run on the long sweeping left kink up to the high speed chicane of Turns 11 and 12, Vettel gaining by a second. However it was mistake by Vettel that decided the outcome, a lapse in concentration meant he went deep into the tricky Turn 15, releasing Hamilton on the penultimate lap. His apology was tinged with frustration, anger and embarrassment as Maurizio Arrivabene looked to the skies, contemplating the fact that a strategic error had cost the Scuderia a precious race win.

Unchallenged, Rosberg took the flag eight seconds ahead of Hamilton as Vettel rounded out the podium. Fifteen weeks have come and gone, yet the uniform trio still remained, one hopes that a more thrilling and lengthy Championship battle is in the making, with Rosberg claiming four victories in the last four races; Hamilton failing to trump the German after taking his third world crown in Austin, back in October.

The tussle between the two Toro Rosso drivers was extremely heated as they pushed and probed for a way past the Renault of Jolyon Palmer, but the débutante kept a cool head and frustrated both Sainz and Verstappen in their endeavours, putting in an accomplished drive to end up 11th. Verstappen become more and more hot headed and time wore on, exploding into a foul mouthed tirade down the radio, pleading that Sainz got out the way. The conflict between the two came to a climax on lap 53. Both of them had engineered a way past Palmer before catching up to 8th placed Bottas, Sainz locking up at Turn 15, causing Verstappen to tap his right rear and spin around. Cue more anger from the young Dutchman as dad Jos looked on. He flicked it round to finish 10th.

The feel good story of the race was Romain Grosjean silently bringing his Haas home in an impressive sixth, ensuring that Gene Haas’ team became the first brand new constructor to score points on their debut since Mika Salo scored 6th for Toyota all the way back in 2002 at this very circuit. The Frenchman’s decision to leave Enstone may be justified after all if this is anything to go by.

Bring on Bahrain. But please, no more elimination Qualifying.