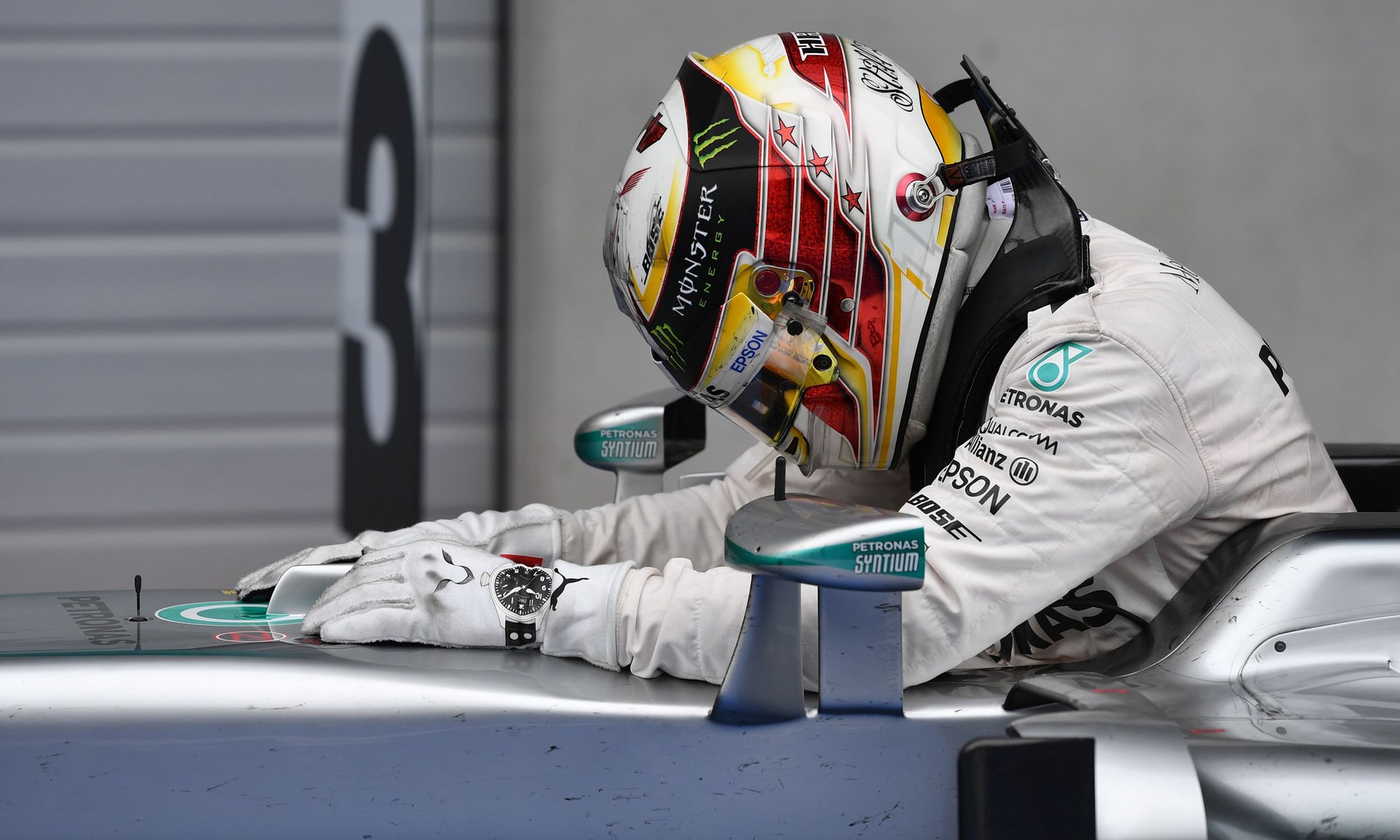 Amongst the scenic backdrop of the Styrian mountains, Lewis Hamilton clinched his third win of 2016 after fighting back to dramatically snatch away the win from his Mercedes team mate and championship rival Nico Rosberg in a thrilling Austrian Grand Prix.

After nailing the timing of his Qualifying lap in an interesting session yesterday for his fifth pole of the season, Hamilton had the best chance to close the gap that Rosberg extended last time out in Baku. Even more so when Rosberg suffered the misfortune of a 5 place grid penalty for a gearbox change, after a shunt caused by a left rear suspension failure in Practice 3. That was one of many suspension failures over the course of the weekend, as the Red Bull Ring kerbs punished those who dared to try and test the limits of adhesion.

Nico Hulkenberg also got his timing right on Saturday afternoon, lining up second with Jenson Button’s McLaren-Honda behind him – getting to look at the first set of lights is a rare occurrence now for him. Felipe Massa started from the pitlane, alongside Daniil Kvyat.

What’s more, is that with the introduction of the Ultra Soft tyre compound, new for 2016, Michael Schumacher’s 13 year old Qualifying record was smashed by nearly two seconds.

The race itself was decided on the very last lap. A brake failure and a suspicious line by Rosberg caused contact with Hamilton, the World Champion forced off the track before being able to breeze past Rosberg’s limping Mercedes, using its front wing almost as a crutch for the last few corners.

Hamilton made his intentions clear after the session yesterday. “I want to get the best start. There’s no point wishing someone else does something – I want to win”. Bold words, backed up by a fine start. Although that was not before Pascal Wehrlein was rather spooked by his grid position, a fine performance in his Mercedes powered Manor put him in 12th. Yet with Massa’s box vacant, he had a moment and pulled into the 10th spot, before swiftly reversing after completing his clutch warm-up procedure. Surprisingly, there’s nothing in the rules that says it’s illegal.

The initial getaway from Hamilton was perfect, as was Button’s but Hulkenberg bogged down after clicking into second gear. He was swamped by Kimi Raikkonen and Rosberg into Turn 1. His day went from bad to worse rather quickly. Passed by Raikkonen, Rosberg, Max Verstappen, birthday boy Sebastian Vettel and finally Daniel Ricciardo; he fell from 2nd to 7th quicker than he could say “Scheisse“. He ended up well outside the points, after serving a 5 second time penalty for speeding in the pitlane and then having to make an extra pitstop after suffering with vibrations.

The battle between the two Mercedes bubbled, ebbed and flowed. Hamilton built up a comfortable gap as Rosberg recovered positions. The German was the first of the two to pit, and it proved to be crucial. As Hamilton stayed out, potentially in anticipation of rain – as Wehrlein reported raindrops in several parts of the circuit – his tyres lost performance, the resurgent Raikkonen chomped down the gap as the laps wore on. He eventually made his first stop on lap 23, but relinquished track position to Rosberg, who’d carried out the undercut to perfection.

The field was bunched up before the halfway mark, Vettel’s right rear tyre exploding down the pit straight. No celebratory confetti rained from it, just rubber that was flailed into the path of Rosberg after a 70 yard launch into the blueish Spielberg sky. Vettel tapped the inside barrier after losing control and skated back across the track worryingly, Wehrlein just managing to dodge out the way. That brought out the Safety Car, somewhat helping tyre life. If anyone wanted to make the one stop work after boxing early, they had been given a helping hand.

The second half of the race was finely poised. The two Mercedes led the two Red Bulls at their home circuit with Raikkonen in close contact. It developed into a marvellous five way scrap for the win, especially between the two Silver Arrows cars, Hamilton and Rosberg trading fastest laps.

Thinking caps were put on, as the watching world speculated that both the Mercedes would have to put again. Speculation turned to reality, Hamilton stopping first, and suffering a slightly slow stop as the left rear didn’t want to come off effortlessly. It cost him 1.2 seconds. Rosberg followed him in the next lap, an ultra-smooth stop saw him retain and build on his advantage, but he was camped behind Max Verstappen, who had looked after his tyres perfectly in order to lead.

It stayed that way until lap 61, when Rosberg passed Verstappen into Turn 4, putting a buffer in between himself and Hamilton, who then got past the teenager himself a lap later. The 18 year old was starting to struggle, admitting that his tyres were starting to degrade, with Raikkonen catching quickly. If the race had been 75 laps, he may not have got his second place.

That set up a 10 lap shootout between the two championship leaders. Each car had their faults – Hamilton’s suspension was at a critical point, especially at the sweeping last corner, the Briton attacking the kerbs a little more ferociously than was agreed at the pre-race meeting. Meanwhile, every time Rosberg stamped on the left pedal, plumes of brake dust flew up into the atmosphere.

That led to the race defining incident. Hamilton scythed down the 3 second gap, getting within one second when Rosberg clipped the inside kerb at Turn 1, losing time on the straight, allowing Hamilton to tuck into his slipstream, pull to the outside and have a go at the Remus Kurve. Hamilton trying to hang it round the outside as Rosberg ran deep. As suspected, there was a brake-by-wire failure on Rosberg’s car that was confirmed by Toto Wolff, but onboard footage showed that Rosberg made little attempt to thoroughly turn into the corner at the right time. There was contact, Rosberg’s front wing buckled and tucked under his T-Tray, just after he’d managed to get rid of Vettel’s Pirelli rubber from it…

The German didn’t give up, scarcely giving Hamilton space to rejoin the track, but he was powerless to stop the Brit passing him, just before the yellow flags for Sergio Perez’s unresponsive Force India that was buried in the barriers.

After the race, talking to Sky Sports F1, Wolff labelled the crash “brainless” and “upsetting”, reiterating that he did not want to see any more repeats of Spa in 2014 and Spain this year. Rosberg came under investigation from the stewards for not being amicable, shall we say. We await the verdict of that to be made public.

Hamilton said that his personal opinion would be touched with bias, by human nature, but did say that he left “tonnes of room for him [Rosberg]…, so pretty sure he hit me rather than the other way.” Hamilton entered the podium celebration to a chorus of boos, which he didn’t understand.

Both Verstappen and Raikkonen also profited from the clash, moving up to second and third respectively – Rosberg limping home to fourth, conceding thirteen points to Hamilton, the gap closes back down to eleven.

Yet, the feel good story of the weekend was not only his Qualifying result, but Wehrlein’s finish. Courtesy of Perez’s accident, the DTM champion was promoted to 10th, scoring an emotional point for Manor – it was the first since the late Jules Bianchi’s ninth placed finish in Monaco 2014, a score that kept the team alive for 2015. Additionally Button secured a sixth placed finish, affirming McLaren’s pace around here this weekend with a fine drive.

It’s certainly the best way to come into his home Grand Prix next week.